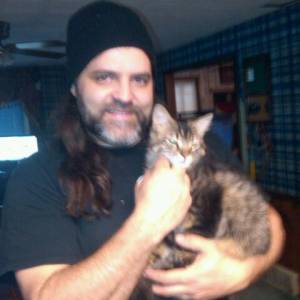 Lead guitar player and recording engineer for The Lost AtlanteansI would also like to continue on the recording engineer for any project I get involved with.Looking to join another band as TLA is on a hiatus or will be reforming later with new members, But I am looking.I can also lay down bass lines and some keyboards.I am currently really only looking for guitar work Lead and Rhythm. If you need a full time bass player it prolly not me. Unless it pays well and I can play fretless all the time.

Type O negative, Opeth(2008 and up), Danzig, BLS, Dream theater,Steeley Dan, Miles D***********s Brew), Vic Chestnut, Ben Harper, A Pale Horse Named Death, Tryptykon,UFO(with all their guitarists),Iron Maiden as well as standard radio rock of Led Zeppelin, Rush, ect... I like loads of different stuff, mostly never on the radio type. I like classical , Jazz, Rock, Metal, Folk Metal, I even like to write pop music for fun, not really good at it , but then who is.As you can see I like a variety of music. The right project for me at this stage of life would have to be heavier than lighter. Think Modern prog metal( not so progressive that you cannot play it well live or would be boring live) but definitely progressive. Its a fine line and its hard to walk.

Loads and loads, Guitars , 1997 PRS CE24, 1981 greco flying V , 1982 Greco flying V , a bunch more (around 15 more)some custom built some just good guitars that I bought some are projects, My new amp is Mesa JP2C into 2x12 vertical cabinets ,Headrush Gigboard with FRFR for great travel practice amp,(set up literately in 5 minutes ) and is 80% accurate to my tube amp set up.I keep a couple of guitars tuned to B (1987 Gibson V and Dean EVO)for gothic metal or just really low stuff as well as a Fenandes Bass tuned to B .A medium PA (a good size room with say 300 to 500 people in it) with Mics and Dis for small band .A couple of recording interfaces and computers to make that happen, as well a small variety of Mics and stands with access to more .