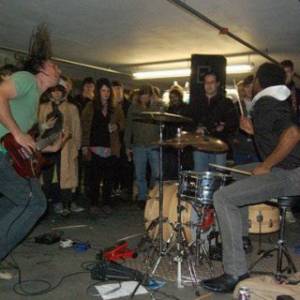 I played guitar in a noisy two-piece on the West Coast that mixed Lightning Bolt's hyper, fuzzed out bombast, with Godspeed You Black Emperor's epic, cinematic scope. The drummer quit and I'd like to continue the band in Nyc. You can check out the last song we recorded here: Pretty Lightning Bolt-y, with some pitch shifted, chant-along vocals buried in the mix. Here's a track with more prominent vocals. It's a cover, but I think faithfully captures the vibe of the band: And finally, here's a clip of us live a while back, to give you an idea of the type of live show I want to play: Basically, intense and crazy but fun and uplifting. Really get the party going. The band will have a new name, since there's already a Boogie Monster in Brooklyn. I'm definitely down to collaborate on the new name and new material with you but was hoping to rehearse old songs to start playing live asap. You can check out more recordings here: First album: Demos for 2nd album:

Rage Against the Machine. At the Drive-in, Lightning Bolt, Godspeed You Black Emperor, Melt Banana